While there’s no launch date yet, the People’s Bank of China is likely to be the first major central bank to issue a digital version of its currency, the yuan, seeking to keep up with — and control of — a rapidly digitizing economy. Trials have been held this year in a handful of cities and tests have started with some e-wallets and online apps, with the Covid-19 pandemic and need for social distancing providing a new sense of urgency. Unlike cryptocurrencies such as Bitcoin, dealing in the digital yuan won’t have any presumption of anonymity, and its value will be as stable as the physical yuan, which will be sticking around too. Behind China’s rush is a desire to manage technological change on its own terms. As one PBOC official put it, currency isn’t only an economic issue, it’s also about sovereignty.

Not all the details are out, but according to new patents registered by the PBOC and official speeches, it could work something like this: Consumers and businesses would download a digital wallet onto their mobile phone and fill it with money from their account at a commercial bank — similar to going to an ATM. They then use that money — dubbed Digital Currency Electronic Payment, or DCEP — like cash to make and receive payments directly with anyone else who also has a digital wallet. Some questions remain, including the impact on Big Tech companies such as Ant Group Co. and Tencent Holdings Ltd. that already offer payment services.

2. Where is it being tested?

The PBOC gave the green light in April for some commercial lenders to conduct internal, hypothetical-use tests of the digital yuan in Suzou, Xiong’an, Chengdu and Shenzhen as well as the 2022 Winter Olympics venues in Beijing and Zhangjiakou. In August the Ministry of Commerce said tests would be rolled out to more cities including Beijing and Hong Kong, but gave no timetable. The tests allow selected users to convert between cash and digital money, check account balance, make payment and remittance. In Suzhou, some government employees have received transport subsidies in the form of digital currency, and McDonald’s in Xiong’an accepts payment with digital yuan, according to the Global Times newspaper. Didi Chuxing, China’s biggest ride-hailing company, is conducting an internal test on its platform, and food-delivery giant Meituan Dianping and streaming platform Bilibili Inc. are in talks with the PBOC for similar experiments.

No word. In late August, China Construction Bank Corp. made its digital currency wallet services temporarily available online to its customers — probably by accident. People could register a wallet for transactions in digital currency, the account was separate from the user’s regular CCB account, and there were daily and annual caps on amounts, according to Caijing magazine. The functions were soon removed from the mobile app. PBOC Governor Yi Gang said in May the trials are just part of “regular research work,” dialing back expectations. The mention of the Winter Games suggested 2022 as a possible target. Innovation regarding digital currencies also was mentioned in the grand plan to make Shenzhen, the technology hub next to Hong Kong, into a world-class city by 2025.

Yes. China is increasingly a cashless society. Even street-food sellers in small towns will prefer to use a mobile payment app than make actual change. Such apps handled 53 trillion yuan ($7.8 trillion) of transactions in China in the first quarter of 2020, according to research firm Analysys. Ant’s Alipay handled more than half of that, followed by Tencent’s WeChat Pay with a third. The PBOC said all non-cash transactions (which also includes such things as credit, debit and stored-value cards, bank transfers and checks) totaled 3.8 quadrillion yuan in 2019. The trend is hardly unique to China: A central bank survey in Sweden found that only 13% of people in 2018 paid for their most-recent purchase in cash, down from 39% in 2010.

It’s hard to say. The PBOC’s digital wallet is just a wallet, probably with some features allowing people to pay for some retail services, whereas Alipay and WeChat Pay are deeply embedded in a whole world of social media, e-commerce, ride-hailing, bill-paying, investments and other functions. There’s no obvious reason why they couldn’t co-exist. But it’s unclear how they will work. The PBOC’s push comes as Ant is preparing to raise about $30 billion in what could become the largest initial public offering in history — money the company has said will help it diversify beyond the payments business. While it’s taken part in the PBOC’s research and development since 2017, Ant said in its IPO prospectus that it may “not be able to fit into the new changes,” and that it’s difficult to estimate what the impact of the DCEP will be on its business.

6. Why is the PBOC doing this?

The project was started by former PBOC Governor Zhou Xiaochuan, who retired in March 2018. He wanted to protect China from having to some day adopt a standard, like Bitcoin, designed and controlled by others. Having the ability to track money electronically as it changes hands would be useful in combating money laundering and other illegal activities. Facebook Inc.’s redesigned cryptocurrency project, called Libra, may have sped things up. Assuming it goes ahead, Libra could end up increasing the dollar’s dominance — and weakening China’s capital controls. As the head of the PBOC’s research bureau, Wang Xin, put it last year, that could have “economic, financial and even international political consequences.”

7. Is it a cryptocurrency?

Probably not. When we say cryptocurrency, we usually mean an offering such as Bitcoin that uses decentralized, online ledgers known as blockchain to verify and record transactions. It and others such as Ether support anonymous transfers without the need for a middleman — or a central bank. The wild volatility in their value, however, makes them ill-suited for use as a means of payment. Libra will be a set of cryptocurrencies, but so-called stablecoins, with each backed a real-life currency such as the dollar, euro or pound. Initially at least, Libra will be run by private companies including Facebook, Uber and Spotify. The PBOC will, of course, back the digital yuan, making it the opposite of decentralized. It’s also not certain that it will use blockchain, either.

8. Why not use existing coins?

China banned cryptocurrency exchanges and so-called initial coin offerings in 2017 amid a broad effort to cleanse risk from its financial system and clamp down on so-called shadow banking. They can still be traded, but through a slower, more restrictive process. Digital currencies also could provide a way to move money out of China, potentially adding to capital outflows that would undermine the yuan’s value. Even though Libra isn’t out yet, Chinese officials have called for oversight by monetary authorities. (Facebook’s website is banned in China, but many Chinese access it via a work-around called a virtual private network, or VPN.)

9. Why not use blockchain?

Researchers have expressed doubts about whether the technology would be able to support a large volume of simultaneous transactions. China’s annual Singles’ Day shopping gala in 2018 had payment demand peaking at 92,771 transactions per second, far above what Bitcoin’s blockchain could support, according to another central bank official, Mu Changchun.

The bank wants to “strike a balance” between anonymity and the need to crack down on financial crimes, Mu said, but it’s unclear what that means. The PBOC has said that user information won’t be completely exposed to banks. But user identities will likely be tied to individual wallets, giving authorities another window into people’s lives. PBOC Deputy Governor Fan Yifei suggested in an article in 2018 that banks may need to submit daily information on transactions and that there could be caps on transactions by individuals.

11. How will banks be affected?

Mainly in bookkeeping. Digital cash would have to be kept separate from regular savings, because it represents money in actual circulation (known in central banking parlance as M0), not the so-called demand deposits (M1) which banks use to lend out again to companies and households. Commercial lenders would deposit 100% worth of reserves at the central bank in exchange for digital currency, which it then distributes to retail users. The two-tier system also reduces the burden on the PBOC to perform due diligence, revamp IT systems and answer client requests.

Probably not immediately. As the PBOC’s digital money is designed to replace cash, it won’t have a big impact on the broad money supply, and thereby its effect on monetary policy will likely be neutral. If the digital currency is widely accepted and people are encouraged to hold more cash, bank deposits could decline, but the impact will be manageable, according to a 2018 article from the PBOC’s digital currency research institute. In a more distant future, the central bank might use digital currency to help steer the economy. Patent filings made public in October 2018 described a currency that would require banks making loans to input details about borrowers and interest rates before funds could be transferred. That could allow the PBOC to more proactively control bank lending and direct funding where it deems appropriate. Furthermore, should there be a need for China to turn to an unconventional monetary policy toolkit, digitized currency would allow it to apply negative rates even for people holding digital cash.

Before it’s here, it’s on the Bloomberg Terminal.

Tue Oct 13 , 2020
BERLIN (Reuters) – The latest economic data provide hope that Germany’s economy can return to pre-crisis levels in early 2022, Finance Minister Olaf Scholz said on Tuesday. Germany’s rising level of government debt is not a problem because the country can tackle the situation with “good growth”, Scholz told TV […] 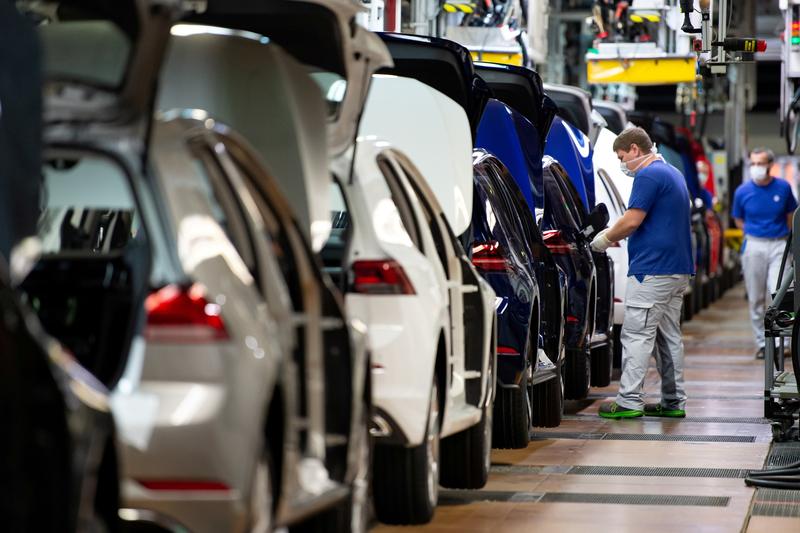